If you are a cricket fanatic, you must have been knocked down by the blow novel coronavirus has given to the cricketing fraternity. Yes, there is actually no cricket going on around the globe right now. But still, there is a ray of hope as we all look forward to the Asia Cup 2022 schedule announcement. The tournament where Asian cricketing powerhouses battle for the title, the Asia Cup has been played in two different formats lately with as it follows the tracks of the next scheduled ICC events. With ICC World T20 scheduled in 2021, this year’s Asia Cup was to be played in the shortest format of the game to let the Asian sides prepare well for the World T20. But is it going to happen on schedule? Let’s find out!

Well, the Asia Cup T20 Schedule hasn’t been announced yet as we don’t have any word from the officials until now. With all the controversies going around the tournament’s venue, things were just about to settle down, as PCB Chairman Ehsan Mani had agreed in one of his statements that the tournament will be played in UAE, before the world corona virus pandemic took over the world and most of the sports events were cancelled.

Even though no final call has been taken on the tournament’s future yet, we still can’t be certain if the tournament will be held according to the plan. The only legitimate news we had on the Asia Cup 2022 schedule was that the tournament was to be staged somewhere in September 2022 and the final dates with complete match day schedule yet to be announced. But it’s all blank for now and nothing is certain.

We’ll keep you posted with all the latest updates on the tournament’s schedule and will share all details with you right here as soon as the official word comes out.

The Asia Cup 2022 is going to be a six-team tournament that will feature all the five full-member Asian teams on ICC panel. The sixth team will be decided through a Qualifying tournament in August 2022. Here we have the names of all the teams that will be participating in the T20 event later in the year.

The Qualifier will be decided after the Qualifying Round that is scheduled in August 2022 in Malaysia. But, there is nothing certain on whether that tournament will go ahead according to the plan or not either. So, we’ll have to wait with our fingers crossed.

The schedule of each team will be announced in due course and we don’t have many details on this either as of now. You can stay tuned for all the updates and we’ll share with you as soon as the complete Asia Cup T20 2022 Schedule is officially announced.

Before the Covid-19 pandemic took over the world, there was a little conflict going on between Pakistan and India on hosting the event. Pakistan was named the host for the event at the ACC meeting in December last year but the BCCI never received that decision very well. They were already propagating the thought that India won’t be visiting Pakistan due to the ongoing political conflict between the two countries. They wanted the tournament to be held at some neutral venue or they’d boycott the event.

The last meeting to discuss the matter had to be held early in March but then there was chaos all over and all cricket was cancelled for the time being. Later, however, there were statements from the BCCI President and the PCB chairman that affirmed the tournament is going to be held at a neutral venue. And, the venue proposed for hosting the event was UAE. So, if the tournament goes on schedule and is played in UAE, the following stadiums can be expected to host the matches of the event.

We all hope that the situation gets better towards the latter part of the year and we get to see a complete Asia Cup 2022 played in the true spirit of the game. The Asia Cup 2022 Schedule hasn’t been officially announced yet and we’ll keep you posted as soon as the word comes out. 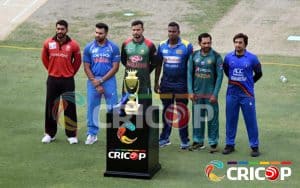